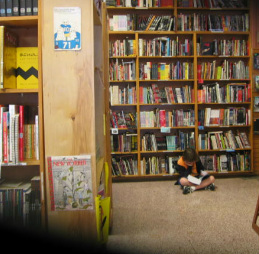 
Frank was getting a little tired of his younger brother, Stanley.
When he finally sat down to think about it, he wasn't only tired of him, he was angry at him. In fact, Frank gulped, he was jealous of him. He almost hated his kid brother.
He swallowed hard again. That was really too bad, he thought, because when he and Stanley had been younger, they had been such good friends.
Only two years separated the boys and Stanley had always looked up to Frank for advice and for learning how to do things.
Now all that had changed.
Stanley was only eight but he was a super athlete...the best player on the hockey team and the soccer team and the swim team. He starred in baseball too, and everyone thought he was great. Stanley was always coming home with medals or trophies or having his picture in the paper. Everyone adored Stanley.
No one likes me, Frank confessed bitterly to himself. He sat down hard on the bed in his room and thought about his younger brother. "He makes me sick!" Frank muttered.
"I hate sports!" he had yelled angrily at his mother when she tried to sign him up on a team...any team. "I can't do it! I'm no good!"
It was true, he was forced to admit. He just didn't seem to have the love or the ability to do what Stanley did.
And now Stanley was a hero to everyone in the family—his grandparents, his aunts and uncles, everyone!
"What a terrific son!" they all said.
Frank got up from his bed, his heart pounding, his breathing heavy.
He stared down at the drawing on his desk, a detailed illustration of a snowshoe rabbit in its natural. It was good, very good, and he knew it.
"Drawing is about the only thing I can do better than Stanley," he snorted in disgust, "but so what? Nobody cares!"
Short-tempered, he began to bang through his desk drawers searching for the rest of his animal drawings he'd completed. He couldn't find them.
Worried and frustrated, he tore out of his room.
"Where are the rest of my drawings—my animal pictures?" he furiously  demanded.
His mother raised her eyebrows from the letter she'd been writing.
"I'm sure I don't know, Frank," she replied coolly, "and if you behave that way about it, I'm certainly not going to help hunt for them!"
"Hey, everyone," yelled his father from the door. "Let's forget the ruckus and get going! Stan's got a game to get to in fifteen minutes!" That did it! A wall of anger erupted inside Frank. "I'm not going!" he shouted. "I hate hockey and I hate watching Stanley play!" And he stormed off to his room again, banging the door shut.
His father roared after him. "Frank! Get down here! You know you can't stay home alone! You have to come with us! Now get into the car and we'll discuss this later!"
Frank understood his father's tone of voice only too well. Against his will, he dragged himself out to the car.
That evening, after Stanley's usually shining performance, Frank sat down to talk with his parents.
Try as they might, they couldn't convince him that he was every bit as good or as loved as Stanley. As far as Frank was concerned, he was odd-man-out in this family!
As the days lengthened into weeks, Frank continued to live his dreary life.
One afternoon after a particularly bad day at school, he spied cars from the local press in his driveway. Frank just cringed. More pictures of Stanley, no doubt. Ugh! he thought.
As he gingerly opened the door, he heard his mother. "Frank!" she called. "Come here! Quickly!"
He groaned again.
"Congratulations, young man," one of the strangers said extending his hand to shake Frank's. "Haven't you heard? You won the city-wide contest with those excellent drawings of yours. What a talent! And so young, too!"
Flashbulbs popped. Frank couldn't understand. "Wha... a...t?" he uttered, confused.
"Your drawings, Frank. The ones that were missing," explained his mother. "We entered them in a contest because we knew how good they were..."
Frank didn't hear the rest. But he did catch Stanley's whoop of delight as his brother's arms flung around him.
"I always knew I had the best big brother!" Stanley hooted.
And for the first time in many weeks, Frank's face burst into a wide, wide grin of happiness.