A Step Back in Time ©

A wizened woman wearing traditional dress accosts me as I focus my camera to take an exterior photo of the church.  She wags her bony finger at me and ominously hisses: “No…no…no…”  She unnerves me so much I quickly hide my camera.  (But later, I sneak back to take a photo from another angle.)
We are in Chamula, a town about 10 km from San Cristóbal de las Casas in Chiapas, Mexico, where indigenous people seriously protect their society and way of life.  If you judge (please don’t!) by modern standards, it appears there are only negatives:
---no photos of the people or their church’s interior
---no consumption of dairy products; the community diet is mostly vegetarian; animals are raised for skins and not their milk or meat.
---no record of birth dates; birthdays are not celebrated.  In the community cemetery high on the hill outside the town, wooden crosses bear only the date of death.
Women:
---cannot vote
---do not cut their thick black hair nor wear make-up 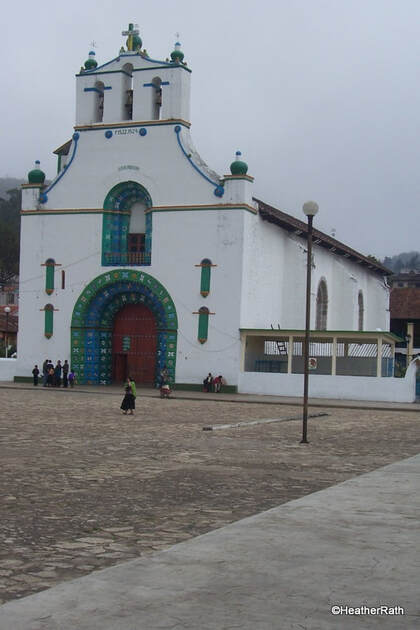 Unlike traditional churches in Mexico, the San Juan Chamula Church near San Cristobal de las Casas does not have pews or even allow photographs of the interior. Inside is a syncretism of Christianity and Maya spiritual belief.
It is our guide, César, once a Chamulan resident, who patiently explains this community locked in time, has chosen not to change.  Descendants of the Maya, the Chamulans are a patriarchal society and carry on the traditions of their ancestors.  Their religion, based on the ancient healing rituals of the Maya, is adapted to their current needs.
They continue time-honoured customs like appointing ‘cargo’ holders, who perform important religious and ceremonial duties.  These holders take care of one particular saint for a year.  If a cargo holder takes care of more than one saint he is called a mayordomo; overseeing the care of many saints leads to the position of a principales, whose role is to offer advice and settle disputes in the community.  Status is the only reward for these leaders since they are not paid for their services nor for the festivities they hold to honour their saints.
Only men can elect civic leaders who are paid by the Mexican government (which accepts this community’s autonomy).  During elections, male voters cheer or raise their hats for their favoured candidate while opponents fall victim to catcalls, sling shots or moving missiles like thrown eggs.
Women breastfeed their children for as long as possible and carry them in cloth slings on their backs.    Families often have up to eight children or more.  Children are born with the mongoloid birthmark (this distinctive feature, also known as blue spots, is common among darker skinned races, such as Asian, East Indian, African and Hispanic people), indicating a connection among the races despite their far-flung locations. 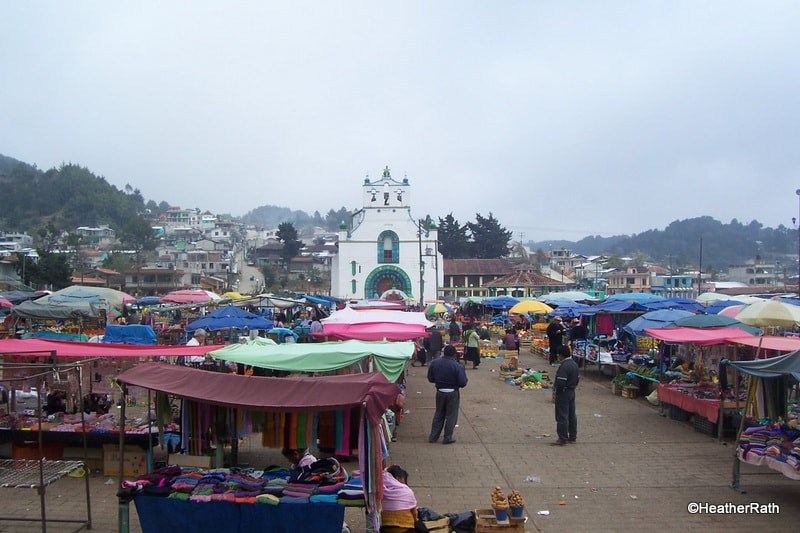 Women from nearby indigenous villages in Mexico, such as San Cristobal de las Casas, sell their produce and textiles in the Chamula marketplace, which takes place in the town's centre square in front of San Juan Chamula Church.
The dress code is based on natural fabrics.  Men wear tunics of black or white sheep’s wool (depending on the season).  They work in town or in the fields or travel to the U.S. for transitory jobs.  The women, who can be found all over Mexico selling their woven wares, are away from home three months at a time.  They wear distinct skirts of black wool, sometimes patterned, set off by hand embroidered satin blouses of bright shades like lilac and turquoise.  In cold weather, people hug shawls around their shoulders even though their feet will lie exposed in the open sandals favoured by their ancestors.
Both men and women make it clear they do not want to be photographed; and photography inside their church is forbidden.  We are warned about this edict again and again and suspect there is a fear the camera may capture the church’s spiritual energy or an individual’s soul. 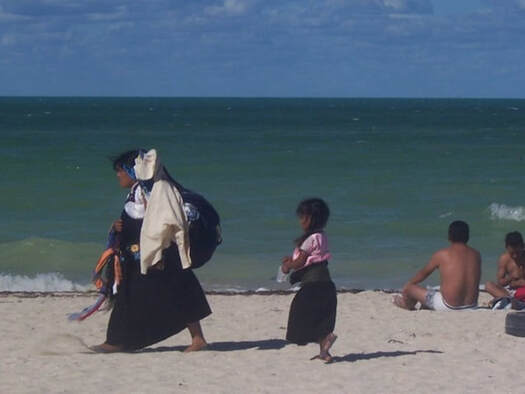 Women from Chamula, Mexico, often travel for up to three months to other parts of the country to sell their weavings. This helps them sustain their communities in their struggle for recognition as indigenous peoples.
When the time is right, César leads us respectfully into San Juan Chamula Church where we step into another time and space.
The first impression is vastness. There are no pews.  Family gatherings and rituals take place on the floor marked by lit candles.  The floor is covered with fresh pine needles, changed frequently, so the fragrance mixed with that of hundreds of softly lit candles and heady incense, is euphoria for the senses.  Mirrors on statues of the saints symbolize the reflection of the sun as well as protection against the evil eye.  As we slowly meander towards the altar, winding our way through and past families sitting beside rows of glowing candles, we see a healer.  She has clasped a hen’s legs together and holding the bird upside down, she is passing the hen along the body of an ill person to rid him of evil spirits.   The family has brought eggs, soft drinks (Pepsi/Coke symbolising black corn), and pox (pronounced posh) a liquor concocted from sugar and pineapple.  String and percussion musicians play continuously at the side of the altar.  With the pungent scent of incense coupled with continual chanting, the interior of the church becomes a mystical experience.
When a resident in Chamula steps out of line, local law enforcement is swift.  Jail cells (for males) face outside so everyone sees who is in prison.  Women, however, are held in private cells within the jail walls.  Feeding the prisoner is left to the family or, sometimes, through the benevolence of the spiritual leader.  Most crime is petty thievery but if an individual is jailed a third time, he/she is banished from the community.  A serious crime, like murder, means the involvement of Mexican police.
It appears the Mexican government has allowed the Chamulans to live according to their own terms and codes of conduct.  The Zapatistas (a revolutionary leftist wing in Chiapas state) support this acceptance and seek that right for other indigenous peoples in their struggle for recognition within the political framework of Mexico.
Published: The Travel Word, July 28, 2011
All authored material and photographs contained on this site are copyrighted © and the property of Heather Rath and cannot be reproduced without her written permission.