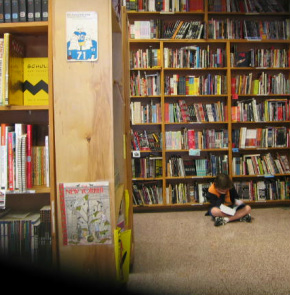 A Test for Love ©


Alone. Kenny was all alone. And scared. And cold. The wind blew in fierce swirls around him. The snow drove bitter, icy flakes into his determined  face as he struggled on in the storm. Their sharpness pierced him as surely as any needle.  But he doggedly trod forward hoisting his backpack over his shoulder. He would never turn back. He could never go home. This time he was running away for good.
Inside his brave body his l2-year.old heart shook with fear and sorrow and anger. He had seen his father hit his mother once too often. This time he was the one who called the police. This time he was the one whom his father chased in a rage. But Kenny was faster than his mother.
He dodged his father. And when his father fell on the stairs because he was too drunk, Kenny quickly dressed and escaped.
"Kenny! Come back!"
His eyes watered, tears freezing on his cheek, as he heard again his mother's pleas. He had looked at her like a son far beyond his years when he quietly announced, "You can't take  this anymore, Mom.  Neither can I. I'm going to Barb's. You get dressed and come, too."
" I can't, Kenny! Not yet! He needs help and he'll kill me if I leave. You know that!"
He saw once more his mother's wild, frightened eyes, like a trapped animal. His heart was torn apart, quickly breaking. Although young in years he held the maturity of a much older boy.  Perhaps it was because of his married sister, Barb. She had instilled the years in him. For she had lived through her father's beatings and tried to protect her mother, too.
The strange thing, though, pondered Kenny as he ignored the wailing wind, was that his father  was not always a monster. When he wasn't drinking his father was a good, kind man who took Kenny to every sports event. He taught him how to catch a baseball, how to pass a football, how to score a hockey goal.  He took him for walks in the woods with his mother. There they learned to stalk the rabbit and the deer, but only to admire the animals, never to hurt them. He learned to identify the screaming cry of the pesky but beautiful bluejay as it flitted from tree to tree. And how to release a struggling fish from the hook without injuring its delicate scales...
But, thought Kenny grimly as he trudged on through the icy cold towards Barb's, there was  a dark side to his father. Just like Darth Vader. Every once in a while his father would disappear and drink too much. When he reappeared he was ugly and mean, a different man.
Once, years ago, he remembered his mother sobbing and Barb crying as they wrapped Kenny up  in blankets and took him to a home where other women and children running away were  sheltered.   Since then Kenny had grown up quickly in his thinking. He feared he might attack his father one  day soon when his father came home drunk. So now was the time to leave he decided. Now, before something terrible happened.
On and on he laboured, the cold outside no match for the ache that imprisoned his heart. At last, thankfully, he reached Barb's. She gasped in horror when she opened the door.
"Kenny! " she exclaimed. And she threw her arms around him.
At that moment his bravery, his resistance vanished, for her warmth melted all his defences.
Barb knew what had happened. She did not ask questions. Instead she sat Kenny down quietly. She kissed his furrowed brow and then she lifted the telephone and dialed.  A few words, a cup of hot chocolate later and suddenly the Rev. Johnson arrived. Solemnly he shook hands with the thawing Kenny. Treating him like an adult, Mr. Johnson spoke earnestly. Kenny should stay with Barb. His mother should leave home, too. As long as his father continued such behavior and refused help, his family should abandon him.
As mature as Kenny was, he welcomed his older sister's embrace then for he sensed this was to be the hardest time in his young life. Yet later, when he held his mother's trembling hand and the  three of them held each other, Kenny felt warmly secure.
"Why is he like that, mom?" asked Kenny, his face filled with sorrow.  "Why is he so great sometimes and so horrible other times? Why?"
His mother looked gently at him. "Because he's sick, Kenny. And when he's horrible he's not himself. He's another man crying for help. But he can't get help unless he admits that. And  sometimes it's hard for a man to admit that he needs help."
She smiled at him, then, a beautiful smile. "If he gets help, son, if he tries to help himself," she spoke softly, "then I’ll go back."
It was then Kenny learned a lesson he never forgot: how to love --- even when the person you love hurts you--- how to love with dignity.
And suddenly, despite the pain, his heart filled with hope.