Local Travel by Bus in Nicaragua: A Slice of Life  ©

“They hang from the bars like monkeys,” says a Nicaraguan colleague. He’s describing his fellow riders as we discuss the exhausting 1.5-hour one-way trip of about 50 kilometres we undertook daily for two months on a local bus in Nicaragua, from Granada to the capital city of Managua and return. 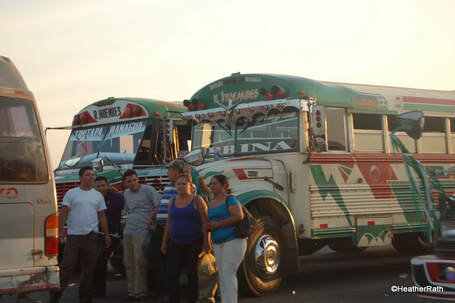 Textile workers waiting for buses outside a large Taiwanese clothing manufacturer (sweatshop) near Managua, Nicaragua. Workers earn between US$150 and $300 a month.
A Ride Like No Other
We were always packed in like sardines, body parts meshed and mingled with scantily clad strangers: ample breasts pressed against bare shoulders, legs jammed into other legs, feet locked into awkward positions, hips hitting buttocks, arms holding purses the size of suitcases, loaded backpacks, heavy packages, all dangling precariously from owners hanging onto overhead bars – if the bus has bars. This is about as up close and personal as you can get while the bus lurches, lunges, stops and pushes its battered frame through the oppressive heat and traffic tangle of Managua.
Buses – many in need of a complete overhaul and all prominently displaying religious paraphernalia proclaiming, in Spanish, God bless us; Jesus is our Saviour; God rides with us – seat about 24-30 people, but the number of people on board swells to more than double during rush hours. 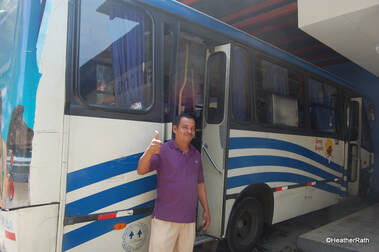 A 'copiloto' gives us a thumbs up in front of one of the buses we rode every working day from Granada to Managua, Nicaragua.
The 30-34º C heat intensifies the experience. Sweaty faces welcome any whiff of stuffy polluted air near an open window. Street vendors yelling “agua… agua… agua…,” braking cars, squealing tires, babies crying on and off the bus, dogs barking, cell phones chirping, music thumping – noise, noise, noise! It’s an assault on our senses, but the people’s bus is a microcosm of daily life in the big city.
The copiloto (driver’s assistant) adds to the chaos. Hanging out the side door, he yells in a melodic incantation, whistles and gestures to the waiting crowds anxious to get to work on time: “Managua! Managua! Managua!” His job is to push more passengers into the bus, down the narrow aisle, bare flesh pressing bare flesh. When he can no longer board the bus himself, he ceases to lure people. “Dale! Dale! Dale!” he yells to the driver. Go! Go! Go! He hangs out the door supported by one arm locked onto a vertical bar inside the oven-hot vehicle. That’s after he’s run alongside the bus, hopping on and off in search of passengers.
Now the copiloto must collect the fare (one way is 24 córdobas – about US $1). Somehow he weasels his way through the maze and amazingly, despite their discomfort and burdened arms, riders hold money ready in hand. If the copiloto cannot reach his intended, fares are passed hand over hand from the back of the bus to him. Córdoba bills, intertwined among his fingers as if growing there, are counted and if necessary, change returns the same way, hand over hand.
An Eye-Opening Experience
Riding local transport is an eye-opening encounter for these two Canadian volunteers teaching English as a second language at a university founded to help educate the poor. As the only foreigners riding the bus among native Nicas for so many weeks, we learned more about the local culture and life than if we had stayed at one of the posh hotels near MetroCentro, a main modern shopping centre in the crowded, fast-moving, but also poor and sometimes dangerous and heartless city of Managua. Garbage is rampant everywhere. 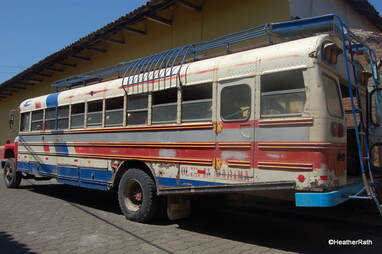 A typical countryside bus in Nicaragua. One Nica friend said that school buses pulled off the road in North America for pollution problems can often be found again in Nicaragua.
Managua is like a giant human aquarium teeming with all types and sizes of fish, vigilant sharks lying in wait, ready to gobble up the small or weak at any minute. Alongside sleek gambling joints sit haphazard boxes of sheet metal with dirt floors, homes of the very poor. In the city, chic office workers and students – the future of Nicaragua – mingle with crowded market vendors. Worn-out grannies, whose faces are etched in deep creases from years of toiling in the unforgiving sun under harsh conditions, are afraid to smile because of missing front teeth. A poster campaign extolling the virtues of equality between man and woman has been lost on the older generations, who have suffered through too many revolutions, earthquakes and corruption. 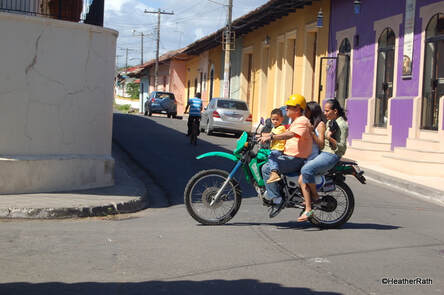 In Granada, Nicaragua, it's not uncommon to see a whole family on one motorbike.
As passengers, we witnessed everyday life from the inside: motorcycle accidents, very common and often fatal for the rider; traffic snarls that force cyclists to weave in and out of stop-and-go vehicles. Meanwhile on the bus, our copiloto cajoles and guides a national police officer, gun in holster, to board despite the mass of humanity. A young woman, evidently feeling nauseous (a sensation I experienced more than once), sucks on raw ginger. A hefty female passenger, wanting to get off at the next stop, hoists herself from her seat by grabbing a male passenger around his waist as an anchor. Facing the opposite direction, his eyebrows shoot up with anticipation at the sudden grip of the woman’s arms. A coy smile lights up his mouth until he turns and sees the the middle-aged woman’s girth. An older woman, held upright by the crush of people, immediately hooks her cane around the back of the empty seat to claim it. No question. It’s hers. Standing squashed but close to my seated self, a young woman has turned her body inward, held in suspension by the enveloping human throng. Her long wet thick hair, recently washed, is dripping white gobs of conditioner down her back and onto my lap. A market woman carries her pungent food wares atop her head. Loud pulsing music from the bus radio adds to the raucous mix of sensory stimuli.
A Well-Oiled Machine
Copilotos are a breed unto themselves. They guide and urge already-stuffed-in passengers to move on down the aisle, sometimes take parcels and place them on the dashboard, help customers off and on, and all with a gentle touch. Each has his own captivating personality.
Once, our bus stopped in the everlasting traffic. In front a battered truck idled, its open back container piled high with ripe watermelons. Two people, facing forward, sat atop the mountain of melons. Our copiloto, already hanging out the side door, jumped off the bus. As if engrossed in a thriller movie, all the passengers watched him. He reached the old truck a few feet away, took hold of its worn back wooden railing and climbed quickly hand over hand to the top. Stepping nimbly over the last wooden bar, he picked up a watermelon, stepped back over the rotting railing and scrambled back to the bottom. The watermelon lookouts saw nothing. Deftly our copiloto re-entered the bus. No Hollywood director could match this drama. We loved the diversion. Weary hot passengers hooted and hollered their approval as the copiloto held aloft the stolen watermelon treasure. We could almost taste the luscious fruit, its water dribbling down thirsty, sweating chins.
Meanwhile, the driver concentrates only on driving. Often he blasts his horn handily attached to a hanging rope dangling on his left. Since it’s his job to get his customers to their destinations despite the traffic, potholes and other obstacles, he scoots down side roads or sneaks along the shoulder or diverts to a collecting lane or pulls a U-turn when he can get away with it – completely ignoring any rules of the road. He and his copiloto are a well-oiled team. During our weeks of bus riding we never saw – or expected to see – a female driver or copiloto.
Despite the discomfort, the heat, the pressing flesh, the stomach-churning exhaust fumes, we see no evidence of petty crime (in fact passengers are extremely honest when paying fares and copilotos even run to nearby street stalls for change if necessary). People do not complain and are tolerant, even polite, some offering seats to the elderly or handicapped. Others fall into a deep sleep with bobbing heads.
Through our heady bus riding, we embraced experiential travel, found a way to meet locals and gained good insight on how hard Nicas work – the long hours spent on tedious jobs for little pay. Those without a job, or underemployed as many are, eke out a meagre existence with little hope of breaking the poverty cycle. (Nicaragua is the poorest country in Central America and, after Haiti, the second poorest in the Western Hemisphere. It has widespread underemployment and poverty. Almost one out of six Nicaraguans live on less than US$1.25/day.)
Riding a packed Nicaraguan bus to and from the big city has given us a compelling glimpse of the country’s real people: warm, upbeat and accommodating despite the many roadblocks and potholes in their lives. 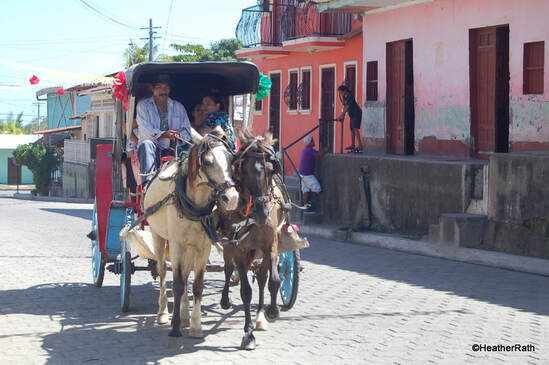 Of course there are other means of transport too, like standard taxis and this horse and buggy taxi in Granada.
Through our heady bus riding, we embraced experiential travel, found a way to meet locals and gained good insight on how hard Nicas work – the long hours spent on tedious jobs for little pay. Those without a job, or underemployed as many are, eke out a meagre existence with little hope of breaking the poverty cycle. (Nicaragua is the poorest country in Central America and, after Haiti, the second poorest in the Western Hemisphere. It has widespread underemployment and poverty. Almost one out of six Nicaraguans live on less than US$1.25/day.)
Riding a packed Nicaraguan bus to and from the big city has given us a compelling glimpse of the country’s real people: warm, upbeat and accommodating despite the many roadblocks and potholes in their lives.

Published: The Travel Word, April 15, 2013
All authored material and photographs contained on this site are copyrighted © and the property of Heather Rath and cannot be reproduced without her written permission.