The next time a little person asks if you believe in dragons, say yes.  Then go one step further and say, “I’ve even tasted its blood!”  Now watch those little eyes pop open.
You would not be lying.
As we hike in one of Colombia’s eco parks, Gustavo, our guide, points out a heart-shaped leaf from a tree explaining it is known locally as “Arbol de Drago”, the dragon tree (croton lechieri).  “The sap from this tree is red like blood,” he says.  From which comes the name ‘dragon’s blood’. 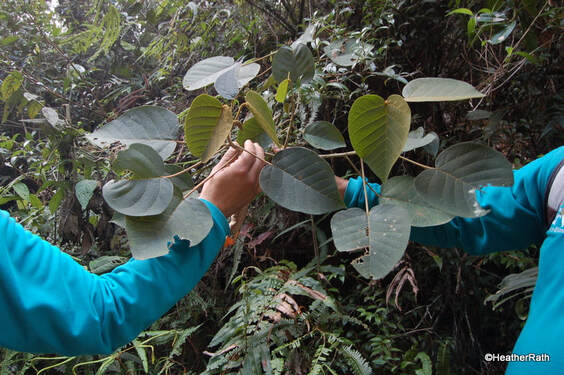 The leaf from the arbol de drago (dragon tree)
Gustavo explains the medicinal properties of Dragon’s Blood/ Sangre de Drago are well-known among the indigenous people of South America.  Locals use the dark red sap to help alleviate or heal a wide variety of ailments and it appears to boost the immune system as well.  The sap is reputed to promote the healing of gastrointestinal problems like ulcers, diarrhea, nausea and vomiting.  It reportedly is a diuretic, prevents dandruff, and can be used on the skin to alleviate acne and insect bites.  A few drops will form a protective coat on a cut, like a liquid bandage, to stop bleeding.
The list of health benefits attributed to Sangre de Drago is long.  It helps fight against memory loss, intestinal parasites, sore throats, and hemorrhoids; indigenous women apparently use a solution of it to wash out the vagina before childbirth.  There are even claims Dragon’s Blood is beneficial in the fight against cancer, tuberculosis, erectile dysfunction and more...it seems a few absorbed drops of this liquid is a cure-all.
Intrigued by these health claims, we later began our own investigation of this remarkable indigenous remedy.  Internet research indicates there have been some U.S. patents registered to study the anti-viral and healing properties of Dragon’s Blood.  A quick search also reveals the dark viscous liquid is sold on the internet.
Gustavo introduced us to Dragon’s Blood in Parque Arvi, an eco park 8200 feet (2500 meters) above sea level which is about 3000 feet (1000 meters) above Medellin, a Colombian city located in a valley surrounded by sloping mountains.  The leaf of the dragon tree is incorporated into the park’s insignia. Gustavo explained the Dragon Tree is also found in the Amazon Jungle, in Peru and Ecuador as well as Colombia.  Each indigenous tribe has its own specific medicinal uses for Sangre de Drago.
Not surprisingly after our educational hike, we headed directly to a natural health store in Medellin and asked for Dragon’s Blood.  The proprietor fetched a small plastic container of purified Sangre de Drago with no additives at a cost of about $2 USD.   Recommended daily dosage is 3 – 5 drops in a quarter cup of water for maximum health benefits.
So, did we actually use Sangre de Drago?
Our little people friends wonder why we’re breathing fire. 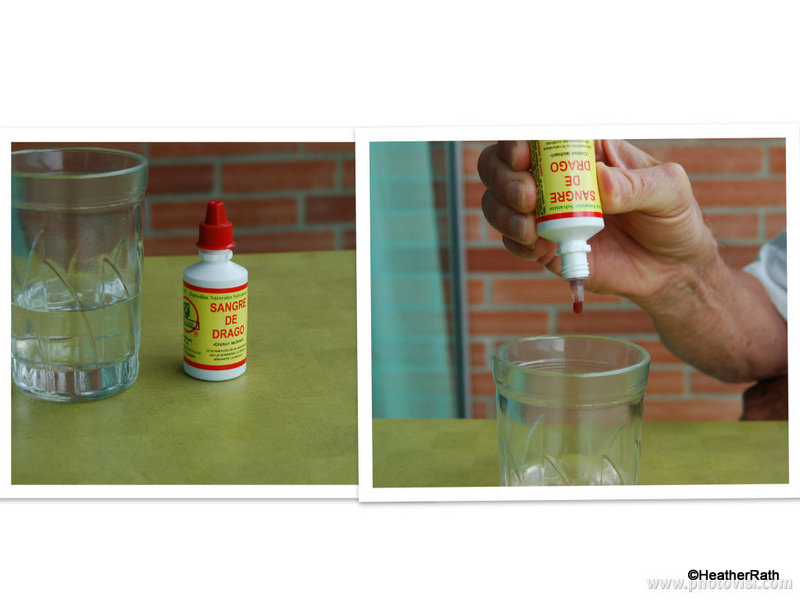 Dragon's Blood, purified and in a bottle
Published: Travel Post Monthly, April 4, 2012
All authored material and photographs contained on this site are copyrighted © and the property of Heather Rath and cannot be reproduced without her written permission.