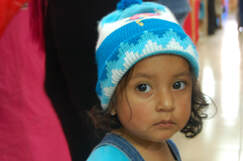 Eco Etiquette on The Enchanted Islands 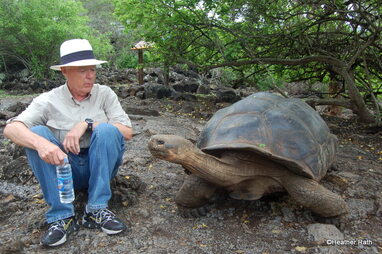 Welcome to the Galapagos Islands. "not too close please"... "I SAID NOT TOO CLOSE!!!"
“Watch where you’re stepping!”
I flinch.  Our naturalist guide, Nikolas, is talking to me.  Excited by being mere inches from the stuffed toy-like sea lions on Española Island, one of many in the Galápagos archipelago in the Pacific Ocean off the coast of Ecuador, and eager for a close-up portrait, I have committed a cardinal sin by straying from the marked path.
“See these rock boundaries?” repeats Nikolas.  “They are there so you know where you can walk and where you can’t.  If you wander all over you can do so much damage.  Without knowing it, you can step on iguana egg nests buried in the sand or a bird’s ground nest.  So just remember---please---stay on the path.” 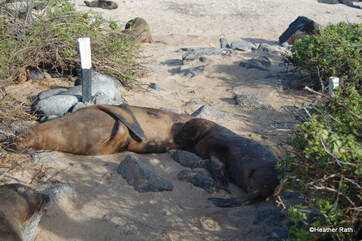 A sea lion mother nurses her pup on the Galapagos Islands. Note the black-and-white trail markers to be respected by all visitors
Nikolas is not being mean; he is expressing his love of wildlife with enthusiasm and passion for the flora and fauna he protects on these remarkable islands.  His stern voice is an appreciated warning for our small group of ten like-minded global visitors who have come to marvel at the uniqueness of life on the Galápagos.
Unfortunately, I stumble again into the pit of ignorance although this time I am not alone.
“Puh-leeze!” pleads Nikolas to everyone.  “No flashes on the camera!  This is not good for the animals.  And please do not touch them.  They have no fear of humans since we do not harm them.”  A sea lion pup, nursing with his mom, looks up with big warm brown eyes, and then nonchalantly turns back to his milk supply.  We are enchanted.  No wonder these are called The Enchanted Islands.
Slowly but surely I am learning the proper rules of etiquette in The Galápagos National Park and Marine Reserve  as we carefully wind our way along  narrow trails, some of them treacherous and slippery from water and shards of hard lava. 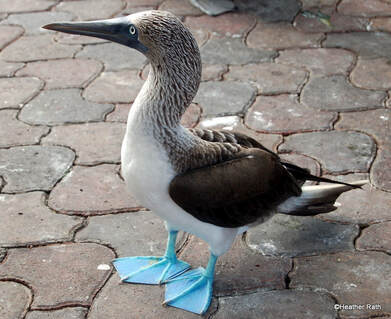 Blue Footed Booby
We move on and quietly observe a mama, papa and baby blue-footed booby family, the chick a mass of ruffled soft feathers.  The bird’s bright blue feet, coloured as if a child has used a paint-by-number set, are used in a mating ritual in which the adults lift up their feet and dance around, sometimes pointing their wings towards the sky.  “You see,” whispers Nikolas.  “You might have stepped on their nests if you wandered off the trail.”  We get the message as we watch the fascinating family at our feet. 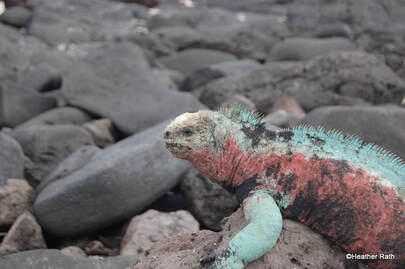 Red and Green Marine Iguana (aka Christmas iguana)
On we tread---carefully.  We come across a pair of mating marine iguanas, the red and green male (“we call them Christmas iguanas”, says Nikolas) atop the squirming red and black female.  Again, we are only a few feet away.
Suddenly, to Nikolas’s delight, he spies a waved albatross.  “This is something,” he exclaims.  “I thought they had all left the island but this one is young and still a bit heavy.”  The waved albatross must actually take off  like an airplane over the island cliffs depending entirely on the southeast trade winds to carry him to feeding areas.  We watch the bird run back and forth repeatedly in a practice session.  Soon he will shed enough weight as he matures and be able to lift off. 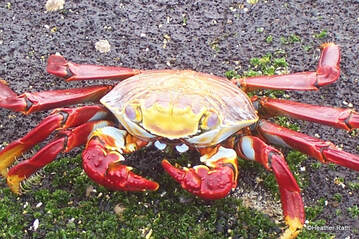 Sally Lightfoot crab
Sally Lightfoot crabs (named by English seafarers) scamper over a black volcanic landscape like bright orange plastic toys, their multi-coloured markings a work of art.
On another island, we come face to face with giant tortoises and catch a glimpse of Lonesome George, about 90 years old, the last survivor of the dynasty of land tortoises from his island.  Found in December 1971, he was moved to the Charles Darwin Research Station on Santa Cruz Island in March 1972.  Repeated attempts by scientists to mate him with a subspecies have been unsuccessful because there cannot be an exact DNA match.

Sally Lightfoot crabs on the rocks
So much to share about life on these enchanted islands!  Perhaps this appetizer will entice you to visit and experience the abundant wild and marine life there.  It is a humbling and powerful education into Mother Nature’s extraordinary survival processes.

Note: Following the devastating Japanese tsunami of March 11, 2011, reports say island authorities are still assessing the damage caused by the tsunami related waves.  Unfortunately their arrival coincided with a high tide leading to waves nearly six feet high. There was enough warning to evacuate island residents, including Lonesome George along with other giant tortoises, to higher ground. However, some nesting sites of sea turtles and marine iguanas have been affected on one of the islands.
Published: Travel Word, March 23, 2011
All authored material and photographs contained on this site are copyrighted © and the property of Heather Rath and cannot be reproduced without her written permission.