Visit to the Gold Rush Town of Barkerville, BC  ©

If you struck gold during the Gold Rush days, then surely you faced a glorious and bright future.  Unfortunately nothing could be farther from the truth, at least in Barkerville BC.  That’s where grave markers in the old part of the Barkerville Cemetery tell the real story of gold mining: the average age of death for miners was 32. 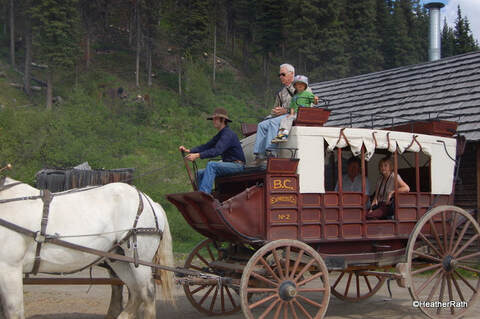 This is only one of the nuggets you learn about Canadian history while being whisked back in time in Barkerville, BC, an early gold rush boomtown that swelled to more than 100,000 people between 1862 and 1870.  At its height of fame, Barkerville was the largest city west of Chicago and north of San Francisco.  Even Vancouver and Victoria were considered too far away from Barkerville to be of any substantial importance.  To reach these tantalizing gold fields, hardy fortune seekers rumbled along the Cariboo ‘Waggon’ Road, a name synonymous with the area today. 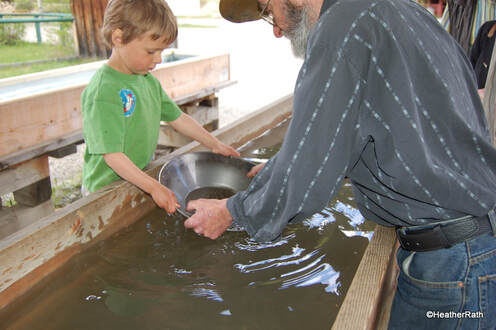 Panning for gold
This saucy new city was named after Billy Barker, originally from England.  Barker followed the smell of gold to the California gold rush in the 1850s before coming to BC.  On August 17, 1862, Barker hit pay dirt 40 feet below the surface at Williams Creek and instantly became a wealthy man.  After wintering in Victoria, he returned in the Spring to find the town bearing his name
springing up around his rich claim.  Two years later, Barker sold his claim although he continued mining in nearby areas until the 1890s when he was stricken with cancer.
Surprisingly linked to the rise of Barkerville was the influx of many underground Chinese workers who left an indelible mark on the town’s history and are commemorated in a museum on site.  One of these settlers was Chinese born Lee Chong who entered Canada using false identification because he was underage (17 years old) at the time.   Later a town merchant, Lee Chong was known for his generosity often grubstaking miners and others in need.  Lee’s Chinese wife, born and raised in Nanaimo BC, described living conditions in Barkerville in the 1930s: she remembers “blistered hands from washing clothes with a metal washboard and the long, harsh winters when tea left overnight in a cup would freeze”.  The couple raised six children.
A sidelight to the Chinese influence was the discovery of opium tins during a 1993 archaeological expedition at Barkerville.  Chinese characters on the lids of these tins indicate they came from opium factories in Vancouver and Victoria.  Large amounts of opium came to BC prior to 1908 when opium was illegal.  Most ‘western’ patented medicines contained opium at the time.
In Barkerville’s gift shop today, books relating to the Chinese connection are available for purchase.  One of these intriguing titles is “I am Full Moon---Stories of a Ninth Daughter” by Lily Hoy Price. 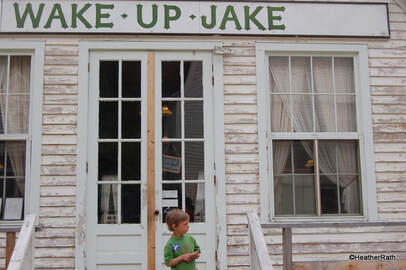 While in Barkerville, you can also experience life as it was in the days of those early miners and settlers.  You can pan for gold.  Character actors, dressed in period dress, roam the streets engaging you in conversation: “Do you think Mr. John Duvall is entitled to his claim on Williams Creek?  I am his lawyer and seeking popular opinion....”   You can remain in town at the Kelly House B&B and soak in its old-fashioned tubs (www.kellyhouse.ca), chow down at the Wake Up Jake Restaurant or attend services at the heritage church.  Of course you can hop on the clattering stagecoach, watch the strong blacksmith wield his hot iron, join in street demonstrations or take in live theatre.  Barkerville boasts over 125 heritage buildings along an old-time streetscape inviting you to explore one of Canada’s most intriguing historical locations in the middle of rugged British Columbia.
Sadly, Barkerville’s founder, Billy Barker, died a pauper at the age of 77 in 1894 in Victoria.  The belief is he lost his fortune due to his generosity:  liberal ‘loans’ to other workers and the flagrant spending by his second wife, Elizabeth Collyer.  A marker identifying his grave in Ross Bay Cemetery, Victoria, was finally placed there in 1962.
Barkerville is located an easy hour’s drive east of Quesnel on Highway 26 along a good paved highway. The pioneer site is open May to September and for special seasonal events throughout the year.
Quesnel, also known as Gold Pan City, lies 660 km. north of Vancouver and is touted by locals as one of the best places to consider retirement living.  The Rocky Mountaineer  train stops overnight here.  Naturally part of the city’s landscape is the Billy Barker Casino Hotel.
Published: Silver and Gold, November/December, 2011