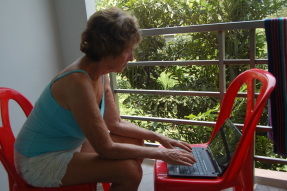 
Life with teenagers is an education. And we should know. We have three of them.
We also have a constantly empty refrigerator, a constantly running car, a constantly running argument about who's turn it is in the bathroom, and a constantly busy telephone. We now retire in the evening before our children.
And we have rules which are constantly stretched or broken, leading to strained relations with the offspring. But even when life does run smoothly it's difficult to laugh together because we've discovered they have a weird sense of humour. Actually, it's offbeat. Actually when you get right down to it, it's black. My initiation into their humour came when our three teenage sons insisted I listen to Dr. Demento, a 'deadly' radio show that originates from Culver City, California and features hit songs.
As a starter, I heard the popular. 'Would Jesus Wear A Rolex on His Television Show'?  Inspired no doubt by the current evangelistic scandal. Then there was "Let's talk Dirty in Hawaiian" which I couldn't understand. Plus a comedy 'Psychological Abuse of Plants'. Actually there was merit to this piece. Did you ever consider a hanging plant might be terrified of heights? However, horror soon set in as I heard the next hit tune, a toe-tapping little ditty called "Gonna Cut My Own Head Off" with a verse that went - "Gonna put it in a box full of crushed ice/And chill it so it keeps real nice. "But the pièce de resistance, the number one hit tune on the Dr. Demento program, was this neat song: "Dead Puppies Aren't Much Fun". Some of the rib-tickling verses: "my puppy died late last  fall/He's still rotting in the hall/Mom says puppy's days are through/She’s going to throw him in the
stew."
Grabbing my heart and hyperventilating, I stared in disbelief at these once innocent  babes now poisoned by this 'humourous' melodrama. They insisted their black humour was no more offensive than Imelda Marcos and her shoes, Brian and Mila and their shoes, the tuna fish fiasco, the Hatfield drug caper, the Klaus Barbie trial, the Contra affair, the AIDS scare, the PTL and Gary Hart scandals, terrorist fears, and the violation of human rights throughout the world.
But whatever happened to 'knock, knock' jokes? I asked weakly. When they shook their heads in exasperation it hit me then.Their humour merely reflects the times in which they live.
Life with teenagers is an education.