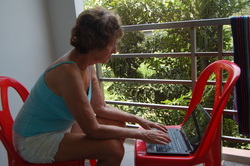 Paris - Mainly Because of the Meat ©

It was when we were on the last minute flight to Paris I suddenly thought about it. In my haste to clean out the refrigerator I had forgotten to check the meat tray. Only when I was flying over the Atlantic did I remember the thawed hamburger meat (with which I had planned a gourmet meal) that was still sitting in the meat compartment.
And horrors, I thought as we landed in Orly Airport, what would it be like after two weeks in the fridge? That hamburger meat haunted me. As we sat in the Moulin Rouge watching the can-can dancers, I thought about how aged that meat must be my now. As I ate steak tartare maison (raw minced beef with sauce and herbs - no, I didn't
know that's what it was when I ordered), I naturally thought of the hamburger meat. Was it green and fuzzy by now?
As I lay on the French Riviera beaches, all I could think of was not the bronzed Adonises around me but that
meat. It was the same as we inched our way cautiously down the precarious mountainside in Monaco. Outside
the Monte Carlo Casino, I remembered the meat. Then it was on to Italy and her lasagna, Switzerland and her Alps, while my mind became increasingly obsessed with the refrigerator back home. Surely that meat must
now be alive.
Finally we arrived home. Gingerly we entered the house. Holding my nose, I cautiously approached the refrigerator. Expecting the worst , I donned rubber gloves and a surgical mask before opening the meat tray.
And there it lay in all its deep brown glory. Surprisingly there was very little odour and nothing moved.
In the years to come, I shall always remember Europe. Not for its epicurean delights, its historical richness, its art treasures, its topless beaches, its Grand Prix drivers, or its fine wine.
No, I shall remember the trip to Europe mainly because of the meat.
All authored material and photographs contained on this site are copyrighted © and the property of Heather Rath and cannot be reproduced without her written permission.