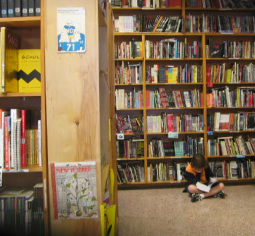 
Werner's stomach did not feel well . . . again. It lurched unsteadily as he slowly swung his feet over the bed and dressed himself. He heard his mother anxiously calling him.
"W-E-R-N-E-R! Hurry! You'll be late for school!"
Suddenly that dreadfully helpless feeling overcame him once more.  He raced from the bedroom to the bathroom… M-O-M" he managed to moan, "it's happened again. I'm sick...I can't go to  school!"
By this time his mother was at his side. He detected both anger and sorrow in her voice.
"Oh, Werner, poor little guy, not again."  Suddenly her tone changed.  "But this is ridiculous! You are a perfectly healthy child. You are being silly and this has got to stop! You must go to school!"
Werner felt weak now. Big tears splashed down his face as he dragged himself back to his room and flung himself down on the bed. "I can't," he wailed in misery, "I can't! I'm too sick!"  His mother was insistent now, unwavering in her determination. "No. You go, Werner. No more of this! You know what the doctor said!"
Yes, 9 year old Werner could still hear the doctor's words ringing in his ears.
"Young man," he had announced after the check-up, "there is nothing the matter with you. I think perhaps you are a little nervous, that's all. I understand once you get to school everything is fine. It's just because you're new that you feel this way." Then he patted Werner on the shoulder. "Don't worry. You'll make friends. And when you do this funny little sickness will go away."
Werner lay on the bed now, dreading the walk to school. He certainly couldn't eat breakfast . . .  Ever since he left Germany for Canada he couldn't eat breakfast.  And yet in Germany he loved toast and jam and cereal every morning. He was lonely here. In his grade 4 class at school he knew no-one. Other kids made fun of his accent. He wasn't familiar with the subjects. He had trouble  understanding his teacher. And he had never played baseball before so he sat by himself at recess.
Still a little wobbly and unsure, he set off once more for school at his mother's insistence. Today was Wednesday--two more days until the weekend!
That morning during gym the teacher took the class outside and brought along a soccer ball. Suddenly Werner's eyes shone. Soccer! He loved soccer! He knew he was very good at soccer! In Germany he played soccer all the time for a winning team!
Instantly his weakness left him. He no longer felt strange and unwanted. He scored once, twice, three times! Each time he had the ball he wound his way through the team expertly. Girls were yelling his name in praise. Boys were constantly passing the ball to him! Werner was happy . . .  very happy. . . the first time he had felt this way since coming to Canada.
That day after school, Danny, one of the boys in his room walked home with him. They practiced kicking the soccer ball in his backyard.
The next morning when Werner awoke he felt that sudden rush of sickness again. But then he thought about soccer, and he thought about Danny, and the sickness sort of went away.
This time Werner played soccer during gym and at noon hour. And Danny came home to kick the soccer ball again.
The very next morning Werner felt only slightly ill. He decided to drink a glass of milk for breakfast. It tasted good! He hurried off to school. He and Danny had to meet some other  boys for a soccer game. And as Werner headed across the schoolyard he could hear his name:  "Hurry, Werner---we're waiting for you!"
A big smile slowly spread across his face.
Suddenly he knew he was going to enjoy Canada after all!