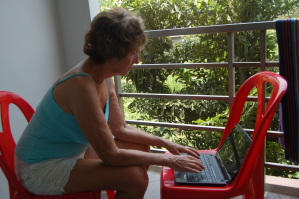 
Sometimes l think l work with some pretty grim people.
Why do you want to go to Venezuela? they asked. If the plane doesn't crash and dump you into shark-infested waters guerrillas will get you.
So with trepidation I followed my fearless husband to "Little Venice" (the literal translation of Venezuela).
Maybe the plane didn't crash but there were other unique experiences. After landing in Barcelona, Venezuela, the plane's wheels sank into the hot asphalt runway while militia and a lone firetruck stood  guard. Our captain was horrified.
One fellow passenger wondered whether this was an inauspicious beginning. And then there was the food. I never used to think of scrambled eggs as revolting but somehow the dish took on  new meaning with the Spanish translation, "huevos revueltos".
And when my husband decided to choose from the menu not knowing what it was he was ordering, he was unprepared for what he received. Tripe soup and a plate full of fried squid are not your typical Canadian fare.
As for our oceanfront hotel near Cumana, there were glances of disbelief when we were told not to flush used toilet paper down the toilet but place it instead in the nearby wastepaper basket.
Are septic tanks that fussy?
Are Canadians prepared to expect the unexpected?
Despite the unexpected, this hot (30 degrees) land where roadside crosses mark car accident deaths and gas is 10 cents a liter, is inhabited by warm, generous people.
Numerous times we were approached with a friendly "Welcome to our country!
Not only that but the prawns on our plate were as large as lobsters (almost); the beaches, pristine; the sea as comfortable as bath water.  In this part of the country at least, the tourist is still a novelty.
Clearly, despite the visible signs of poverty, oil-rich Venezuela is ripe for development.