If we paid attention to the ominous warnings we read, we would never have experienced Parque Tayrona, a shining eco jewel in Colombia.
First, we had to digest those government travel advisories.  A visit to Colombia equalled fulltime danger: exercise a high degree of caution; be vigilant; avoid travel to rural parts of Colombia and on and on. 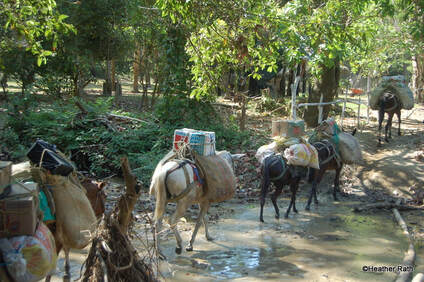 Pack horses and donkeys ford their way across a stream in Tayrona National Park, Colombia.
Jumping that hurdle mentally, we then noticed our guidebook advised the best option in case of a snake bite in Tayrona was to head for an eco cabin cluster inside the park for the immediate administration of anti-venom serum; do not take the time to head back to Santa Marta, our base city.  Santa Marta, a hot (average mid 30 degrees Celsius), extremely humid and sundrenched spot of almost 500,000 people, sits on the Caribbean coast like a once-beautiful aging lady fanning herself with ocean breezes.
Once upon a time, Tayrona was a combat zone for drug trafficking between the Revolutionary Armed Forces of Colombia (FARC), one of the Western Hemisphere’s oldest Marxist guerrilla groups, and right-wing paramilitary units.  Today Tayrona proudly displays its true nature in a tourist safe environment.   Since its creation as a national park in 1969, this biodiversity area covering 12,000 land hectares and 3,000 of sea has been growing in popularity.  Within its territory are sandy beaches, dazzling blue/azure ocean waters, tropical dry jungle, and the rainforest at 900 metres in the Sierra Nevada mountain range.
From Santa Marta, it took one and a half hours using three types of vehicles: taxi to the bus terminal ($2.50 USD), people’s bus for an hour ($2.50 USD pp), and the park collectivo ($1.25 USD pp) to get to the area where we could begin exploring.  The general advice: follow the trail for an hour and a half to our destination on the coast.  Sounded easy.  That’s when the ambiance of Tayrona kicked in.  Surrounded by calling birds, colourful butterflies, shrieking monkeys and crawling cutter ants with their loads of leaf pieces, we forgot the cacophony of noise in the city. With tall tropical trees, swaying palms weaving a canopy of interlocking green fingers above, and thick, lush vegetation sprouting on all sides, we fell under the spell of the jungle. 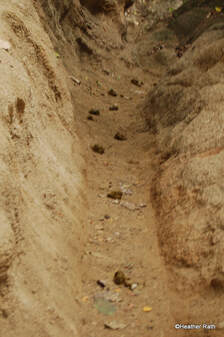 If one gets lost, one only has to follow the trail of donkey poo
The main trail we followed was up and down: it twists and turns through narrow paths between high and low ridges of rock triggering leaps from above, below and across the uneven, sometimes muddy, ground.  A tiring terrain, it offers no relief from the streams of sweat pouring from every pore.  Since donkeys and horses also use this trail, an over abundance of manure waits for human feet that are forced to tread in impassable places. 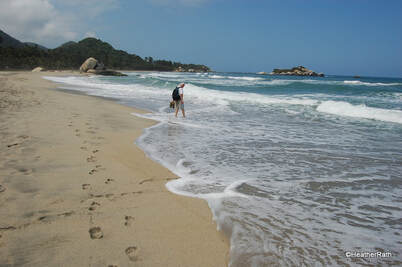 The uncrowded beaches along the Caribbean in Tayrona National Park, Colombia, are just one of its many faces.
Yet every so often there is a reprieve.  Shhhhh....see the agouti rustling in the underbrush.   Listen...hear the squawks from above...a family of titi monkeys plays in the treetops.
After what seemed an eternity we break out of the jungle at Arrecifes on the Caribbean coast, where an authorized campsite dots the shore. After our hot and humid slog, we decide it was all about the journey and not the destination.
For another half hour we hike along the seaside, fording four streams, meandering through clusters of mangroves, until we reach our Caribbean destination: La Piscina (the pool), a bay of smooth, safe-to-swim/snorkel waters sheltered by a long stretch of unspoiled barrier reef.  The destination was worth it (lo valió)!  Other beach areas along the coast produce strong and dangerous undertows. 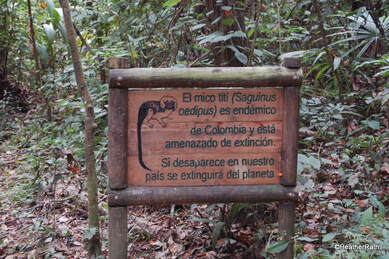 Found in Tayrona National Park, the titi monkey is endemic to Colombia and is an endangered species.
The park, once the land of the indigenous Tayrona people, offers a few archaeological ruins of interest and activities like nautical sports and horseback riding.  It is home to more than 100 mammals, among them jaguars, ocelots and monkeys, most nocturnal and many on the endangered list.
At least 300 species of birds have been recorded in Tayrona including the rare Andean condor.
Endangered species of reptiles like the loggerhead sea turtle as well as fearsome snakes, valuable marine fauna, unspoiled coral formations and endemic vegetation: cacti, orchids, bromeliads, mosses and trees, contribute to the richness of, and necessity for, protecting the park’s environment.
Approximate entry fees are $18 USD for foreigners; $7 USD for nationals.
The park is 95% privately owned and administered by Aviatur, a concession located in Santa Marta.

Published: The Travel Word, April 4, 2012
All authored material and photographs contained on this site are copyrighted © and the property of Heather Rath and cannot be reproduced without her written permission.