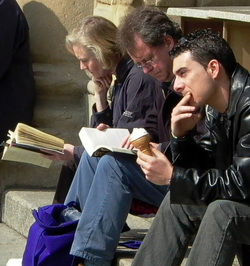 The Road to Hell   ©
Pick of the Day Oct 27, 2020  Commuter Lit
SATISFIED AND smug, we stuffed the final pieces of straw into our life-size, life-like mannequin. Halloween was the perfect time to test the reality of our creation. Standing up our version of Frankenstein in front of a makeshift brace, we four rang the stranger’s doorbell. Then quickly hid behind juniper bushes shielding us from view.

The door opened and the quintessential little old lady stepped forth holding a dish filled with candy. As she held out her goodies, our straw-man collapsed and fell in a heap on the porch.

The old lady screamed. We collapsed in giggling hysteria as she slammed shut her door.

On a high now, we continued from house to house pulling the stunt over and over. After witnessing our scheme’s wild success — and growing bored with its predictable response — we decided to up the ante.

A great idea hit us collectively. The highway overpass presented the perfect opportunity. We’d throw our straw man over the bridge onto the road below just as a car came careening into sight.

And that’s exactly what we did.

The driver of the car slammed on his brakes as our mannequin hit the road in front of him. With squealing tires, he pulled over to the side while we ran to hide in the nearest cover. Heard him curse and swear and then start up the hill with a flashlight.

We scattered, of course. Except me.

Reasoning our victimized driver would think no one would hide near her crime scene, I hid in a nest of evergreens, just off the overpass. Meanwhile, my friends were running like the wind across it.

Glued to my spot, I watched the beam from his flashlight jump around the conifers. My heart stopped. Thrashing through the trees, he methodically swept the beam back and forth. Back and forth.

The beam stopped. Oh, too close.

Dropping my head facedown onto a floor of dried pine needles, I lay prostrate on the cold earth. Barely breathing. Waiting for the beam — and him — to pass.

Suddenly I felt a rough punch on my back. Strong fingers clutched the collar of my coat. Fear set in as he hauls me to my feet. Can’t see his face. But I do see the Canada toque he is wearing. His angry eyes flash like red lights.

“Think that’s funny, do you?” he shouts. His spit hits my face.

“Realize you could have caused a god-damn accident!?” he shouts.

“You’re comin’ with me, Blondie!” Twists my arm behind my back. Pushes, punches me down the slope to his car pulled over to the side.

“Get in!” A command. I feel his fury. He slams shut the back door. Jumps into the front. Locks the doors.

“Just shut the fuck up you little priss.”

A nightmare, I tell myself, but I’m not waking up. Quivering in the back of his moving car. Suddenly nauseated.

“Gonna be sick! Pull over! Please!”

“You think I’m falling for that little trick! If you’re sick, you damn well gonna clean it up Blondie!”

He’s driving like a madman. Speeding. Am so scared. Wetting myself. Can’t talk. Weeping. Wailing. What the hell will happen?

Suddenly he curses. I glance out the front windshield. Loose dog tears across the road. In front of us. He swears non-stop. Swerves. Tires squeal. Hit a curb. He loses control. Car skids on its side now. Crunches.

For a second total darkness. The man is kind of hanging mid-air inside the car. His safety belt held. No sound. No air bag inflation.

I’m thrown against the far door. No safety belt. Curl up in a fetal position.

I listen. No sound from the front seat. No breathing. See only the back of the man’s head. Hanging to one side. Still wearing his toque.

Thinking. How to escape?

Flashlight shines into the car. This time I welcome the beam.

Police see me. In a caring voice, they tell me to stay still. Remain calm. They will get me out.

“You know this man?” asks one officer.

“No.” Am telling the truth. “He forced me into this car.”

They do. Very carefully.

Then, “you need to be checked out in the hospital.”

“Who is he?” they ask again after they make sure I’m okay.

“I don’t know. He forced me into his car. I was terrified.” My face starts to screw up as if I’m about to cry.

An officer holds me.

Attendants work to remove the man with the toque from his hanging harness.

As they release the man’s body, his toque falls off.

Don’t bat an eyelash when I see them. Two horns. They are slightly curved. One on either side of his forehead.

That’s when I knew I had been on the road to Hell.